God is so good.

I can, honestly, say I've never felt God's presence more in my life than in these last few weeks. He's been there for me so much and He's so evident in everything that has happened with Jovi. I always thought I understood the sacrifice God made sending His only son for me... but I get it so much more now. The loss of a child is huge. It's so hard. There isn't even anything that can describe it. It's awful. I can't imagine knowing my child was going to die, even though He was going to save millions. It would still be dreadful. I'm so thankful God did that for me... for us. I wonder all the time what will become of this. I don't doubt for a second that God will turn Jovi's death into something good, but it doesn't change the terrible feeling that my baby is gone. This post is going a different direction... I'm wanting to share an amazing God story.

When Jovi first passed away, I was contacted by my aunt saying my uncle had a client who's granddaughter had just passed away from SIDS. I was told that the baby's mom wanted to get a hold of me and wanted my address. I was just in the beginning of everything. Everything was so crazy. I didn't pursue it and I'm sure I didn't act interested. I've, now, been wanting to reach out. Grief is so lonely. I have an amazing support system, but I've been yearning for someone who has been through this. It's so terrible that anyone else even has to go through this, but I'd been wanting to find someone who had. I've been putting myself out there. Emailing mom's of blogs I've found, joining online suppot groups, and even going to a local support group. I joined a support group through CJ SIDS Foundation. It's a national support group. It's new and there are around 15-20 other SIDS moms on it. I was looking forward to meeting everyone and being able to share experiences with someone who "get's it". A mom, Katrina, gave me her email address. After a few posts, I realized our grieving process is similar. Our philosophy on all of this is similar. I ended up emailing her. In a response, she realized where we lived and started to put everything together. Katrina is the same mom who tried to contact me when Jovi first passed away. We connected through a national organization when we live in the same state! She even journaled about my sweet girl. God, obviously, wanted us to connect. I'm so glad He did. We've emailed back and forth. We've talked on the phone for hours. I only hope this is the beginning of something good... I can't even begin to say how thankful I feel. It's so comforting hearing someone else say so many things I've said or thought. I am so thankful.

Rowan and Jovi have SO many similarites. They both had the same hair. They were both the same age when they died. Jovi was 6 days shy of her 4 month birthday and Rowan was 8 day shy of her 4 month birthday. Rowan has a big brother, too. I would even say their little faces are similar. Rowan passed away during her afternoon nap just like Jovi. Rowan's mommy found her at 4:45ish pm. I found Jovi around 4:35ish pm. We just keep finding more and more things that are similar. I can't help but think that Rowan and Jovi are playing in Heaven. Maybe, they even helped get us together. I am sure Jovi knew her mommy needed a friend.

I miss you so much, Jovi. I love you to Heaven and back. 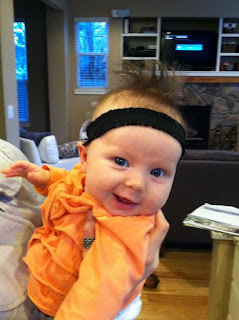 Meet Baby Rowan
Isn't she so sweet? I have a special place in my heart for this little girl and I never even met her.
Posted by Molly at 11:05 AM