It's been a rough few weeks.

Lila June has officially made it to 16 weeks and 5 days... while her sister left us at 16 weeks and 4 days. It's so bittersweet. A lot of sweet, but definitely some bitter is in there, too. Now, we start a new journey filled of memories we were never able to make with Jovi, but are so happy to make with Lila.

The last few weeks were, also, hard because it brought July 10th back in full force. I can't even fathom how I lived that day. I did... but I still don't get how. I'd be sitting there snuggling LIla and thinking how the hell could I do CPR on her in few hours... then have to say goodbye forever in just a few more? My mind can't/doesn't comprehend how I even did it. It must be sheer shock... I've done it... lived the day my baby died... and yet my mind is, sometimes, still boggled on how I did it.

And, of course, the last few weeks were hard because I feard for Lila's life. We've had a few bumps in the road with her health (little ones). She had her first cold... scary because many SIDS babies have colds at their time of death. There were SO many emotions and SO many tears. Often, I just held her and told her she couldn't leave. I prayed and asked God countless times to let her stay... to stay and live here for a very long time. I watched her sleep. I picked her up in the middle of the night just to snuggle her and feel her warm, breathing body. And, she's still here. We made it through this hurdle. A weight has lifted... 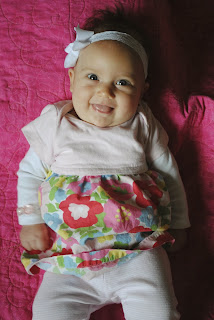 I'm so different than who I was one year ago... Life is so different. Our family is different. One year ago, we were still floored by our baby's death. I was still drowning in grief daily... all day... Jovi's death has rocked me to my very core. Things have changed, though. Some for the better and others not so much.

Missing- I am quite positive I miss Jovi more than I did one year ago. It seems surreal that she's been gone now for 14 months. Holy cow. I miss her so much more. Because then, I had at least just held her two months ago and now it's been 14 months. 14 big months. And I'm pretty sure I miss her more and more with every passing day... Really. The missing doesn't get any better... and maybe even worse. I just never knew I could miss someone as much as I miss her.

Friends- Someone posted on Facebook how they were sorry for falling away from their friends when their son died... and how they didn't know how to be around friends because they didn't even know who they were. I never realized this, but I can so relate. I still am figuring out who I am in friendships that I had before Jovi died. I'm different now. So different than who I was. Like I said, Jovi's death rocked me to my very core. So, I had an extremely hard time being in "normal" friendships. Because I didn't know how to be normal in them. Because I wasn't normal and my life was far from normal. I clung to some old friends and distanced myself from others. I found new friends, because new friendships were easier. Easier to be me and less stressful. So to all those ladies who I fell away from, I'm sorry. I just didn't know how to do it. I'm so very thankful for everyone who surrounded me... for everyone who didn't leave... and for those who I didn't know and became my friend.

Family- Our whole family was different. Sad. Tearful. Not smiley. Not happy. Struggling. We clung to Cash. Our life was consumed by our loss. Every conversation was about baby Jovi. Now, we still miss her. So much. But, at least we aren't consumed by it. We talk about Jovi all the time. Her name comes up easily in conversation but it doesn't have to be in every conversation. We talk about her and cry about her. We don't have to cry every time. My husband is so amazing and deals with all my hard days and listens to me talk about Jovi in broken record style. But, we don't seem to have to do that as much. I don't feel loads of guilt for smiling or laughing or for having a good day.

Guilt- I know longer (mostly, really) blame myself for Jovi's death or question the day over and over again. Or dream that it turned out differently. Nothing I did could have changed the outcome. Jovi died.... again. A shitty deal. A real shitty deal. The day happened as it was supposed to... I don't know how this changed. I think I just finally had to accept I couldn't change what happened. It just happened and was going to happen no matter what.

I have a good life. But, I still have a hard time remembering that somedays. I still cry because I miss my baby. I'm not over Jovi. I'll never be Jovi. I'm just trying to make the very best with the cards I was dealt.

1.) Surround them with love. Be their friend. Support them. Be there for them.

2.) Bring up their baby's name. Every parent I've met loves to talk about their baby in Heaven.

3.) Bring meals, snacks, food... we were surrounded by meals. It was so nice never having to think about dinner when we couldn't even think about anything else. Thank you to everyone who helped keep my toddler fed. And my awesome hubby. And me. The meals were incredible. On top of that, we were given snack stuff for Cash and people even brought him fun toys. We were more than blessed.

4.) Don't forget or think it's ever time to move on. Their baby will forever be missing from their family. Forever. They will never replace their baby. Not with time. Not with a new baby.

5.) Don't minimize their loss. Don't say "well at least this didn't happen"... or "at least you have another child"... or "this person I know lost 3 kids"... let their loss feel huge. Don't minimize it. Because no matter what, it's big to them. Whether it's a 12 week miscarriage, a stillborn 38 weeker, the 16 week old dying of SIDS, or a 5 year old boy. It's all a shitty deal and is a huge loss to that person. Don't minimize it.

6.) Try to remember those anniversaries. They suck. But, getting a text that someone remembers means so much.

7.) Visit baby's grave if you are close to the family. I can't say how much this means.... I once even received a picture text of Jovi's grave from someone I don't know that well. They thought her grave was decorated cute and stopped to see who the baby was.... the text made my day. Finding surprising things on her headstone is so great. It's never weird. It always makes me feel she is still loved.

9.) Never say they can try again for another baby. They want their baby back. Not a new one.

*Thank you to everyone who has loved us, fed us, blessed us, hung out with us, befriended us, visited us... thanks for just being there for us!